Yes, that's right. They put me, a non-drinking, non-smoking physicist at the university's pub for non-commissioned officers.

Not that it was a bad job, mind you. We frequently got days off, I had lots of time to read while on the job (the Uffzheim isn't all that busy most of the time...), and the tips were pretty decent most of the time. It was just frustating to be working in a pub when less than one hundred meters away there are several university institutes with lots of job openings for people with my qualifications...

But this is going to change soon. As you might have noticed, I used the past tense - for I will start at a new job on Monday. Or rather, two new jobs. On Wednesdays to Fridays, I'll work as tech support at the military staff of the university. I just hope I won't be asked anything difficult - I'm more of an end user than someone who can memorize every detail about a piece of hard- or software, though my computer using skills aren't too shabby.

And on Mondays and Tuesdays, I will work at the Institute for Thermodynamics , doing real scientific work at last. I don't know yet exactly what I will do there, but apparently it will involve some high-power laser systems...

Anyway, my stay at the pub wasn't a complete loss. First of all, I got to meet lots of people who work all over the university (I believe this is called "networking"...) - which could be useful one day, since I am currently considering working here on my doctorate after I complete my term of service. Secondly, the tips went a long way towards improving my lousy wages.

And finally, I now know how to pour in a Weissbier . You never know when that kind of knowledge might be useful...

As I have said previously, I'm now stationed in Munich. I haven't seen much of it yet - the pub opening hours are rather long - but I've gained some first impressions of the city by now.

First, Munich - and the surrounding countryside - is flat. Really, really flat, and almost perfect for storing heat. Sure, you get to see the Alps in the South when the weather is good, but that's no compensation. Back in my native Franconia we have high places and we have low places - and there's a noticeable difference between the two.

Second, the city is cramped. This shouldn't have come as a surprise - after all, Munich is the third largest city in Germany, and the most expensive to live in - but it still takes some time to get used to. Shops which would cover huge areas in my hometown of Erlangen, or even neighboring Nuremberg, are squeezed into a tiny corner here. The Inner City around the main train station is a maze of tiny shops in long passages...

I wonder how people in New York or Tokyo cope with this?

And finally, some bonus material: Actual images of German uniforms! 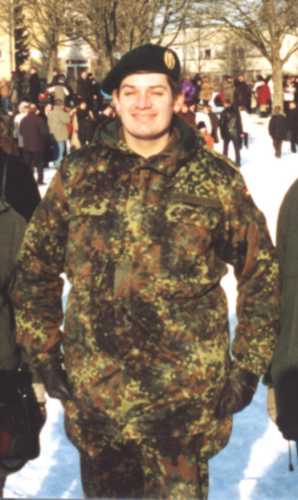 This is me wearing my field uniform. This picture was taken in February, immediately after I had taken my Pledge as a German soldier. The green beret with the golden oak leaves means that I am a member of a Jäger company. If I remember my instructors correctly, we are basically a type of infantry who hide in the forest, let the enemy pass us by, and then take a few pot shots at some tanks from behind if we are feeling uppity that day...

Note that I wasn't grinning because I was proud to have taken the pledge, but because I knew I would soon be sitting in a car driving homewards... You never appreciate your weekends as much as when you are going through basic training!


That's it for today! I'll write more about my new jobs when I get around to it...


Questions? Comments? Counterpoints? Any feedback is welcome - just email me, or voice your opinion on the message board !